We help you automate your small series production

OpiFlex has done many feasibility studies with an appreciated 7-step model. We have helped many smaller companies to profitably automate small series production. The most important thing is that you get a flexible and future-proof solution. OpiFlex specializes in solving the challenge of automation of small series production. OpiFlex is thus selected and approved to carry out preliminary studies that are financed within Robotlyftet.

OpiFlex got through one of the first funded feasibility studies in Robotlyftet. We helped the customer to see the whole based on their conditions and think in new directions. The customer bought an OpiFlex flexible mobile robot for three machines the week after the preliminary study.

Sweden has lagged behind other countries in terms of automation and competitiveness. The Government is, therefore, investing 110 million SEK in Robotlyftet in order for small and medium-sized companies to speed up automation and invest in flexible and future-proof robot solutions.

Do you also want to increase your competitiveness and start thinking about automation? We are happy to help you! Get up to SEK 150,000 in support.

Read about Robotlyftet below, at Tillväxtverket, or contact us at OpiFlex and we will help you!

High mix and low volume are a major trend in the manufacturing industry and the demands for increased productivity and flexibility are also increasing for contract manufacturers. Automating the business is a path to increased competitiveness, but for many the step feels big and you do not really know where to start.

It has previously been very difficult to automate small series production, which is common in Swedish SMEs. As a result, the degree of automation is extremely low and some SMEs find it difficult to attract employees to heavy and monotonous tasks, while at the same time not being competitive. OpiFlex has solved precisely this challenge and therefore won the EU Commission’s major innovation award in 2015 with the jury’s motivation “OpiFlex solves an important challenge for Europe’s manufacturing industry”.

OpiFlex flexible and mobile robot solution solves the challenge of automating small series production and can be used for most applications with one and the same robot, for example from CNC to edge bending, material handling and palletizing, see examples of applications here. We therefore offer a future-proof robot solution that creates completely new opportunities to automate high mix and low volume as well as cost-effective high volume with high performance in all industries, such as wood, metal, construction, food and plastic.

OpiFlex got through one of the first projects in Robotlyftet and the customer IS Plåt bought an OpiFlex flexible mobile robot for three machines the week after the feasibility study. In an article in Svensk Verkstad, Erik Ralvert, CEO of IS Plåt, explains

– OpiFlex made us think in other directions, Erik explains.
– We discussed back and forth internally and looked at some of OpiFlex references. Many at the company thought this was an exciting product that would be fun to work with, a challenge. We started to see this as the way forward, to increase productivity and at the same time bring a new exciting product into the machine park.

Read also more about taking the step to the automation of small series, with Robotlyftet

We assess what is appropriate and profitable to automate by thinking flexibly and future-proof. We also calculate your financial effect based on your figures using the production economics model developed by OpiFlex, RISE and Chalmers in the project "Produce in Sweden". Read more about the model and OpiFlex services here

Upon completion of a feasibility study, substantial discounts are offered on installations.

The video above shows a presentation on how OpiFlex performs automation analysis in Robotlyftet during a digital technology workshop that IUC has invited to. OpiFlex CEO Johan Frisk was invited as a speaker. The video was recorded 2020-05-19. The study was conducted at Nords International and CEO Simon Hedberg also participates.

“Sweden is world-class and growing in automation, but our competitor countries are growing even faster,” said Damberg.

This is the development they want to reverse with the 110 million over a four-year period that the government is pushing to primarily make it easier for small and medium-sized companies to speed up automation.

Automation and robots have previously been profitable, especially for large-scale production and long production lines. That belief is probably still alive in many people.

– There are many flexible solutions today that many small and medium-sized companies do not know about, so it is possible to get profitability from automation even in small contexts, says Damberg.

– I think you are on the right track here, says Mats Sundstedt who runs FEAL AB, a company that has made the automation journey it is now hoped that many other small and medium-sized companies will embark on with Robotlyftet.

– Before your first robotisation, you do not know what to do, you are unsure, it costs a lot of money and so on. With professional help, we managed it.

– Hopefully this Robot Lift can be a lift not only for Sweden's robot city Västerås, but the whole country, says Mikael Damberg.

– I think Robotlyftet is an important part of the automation of Sweden, says Johan Frisk, CEO of OpiFlex, a very good complement to Producera in Sweden, which I have taken the initiative for and which is developing well right now. 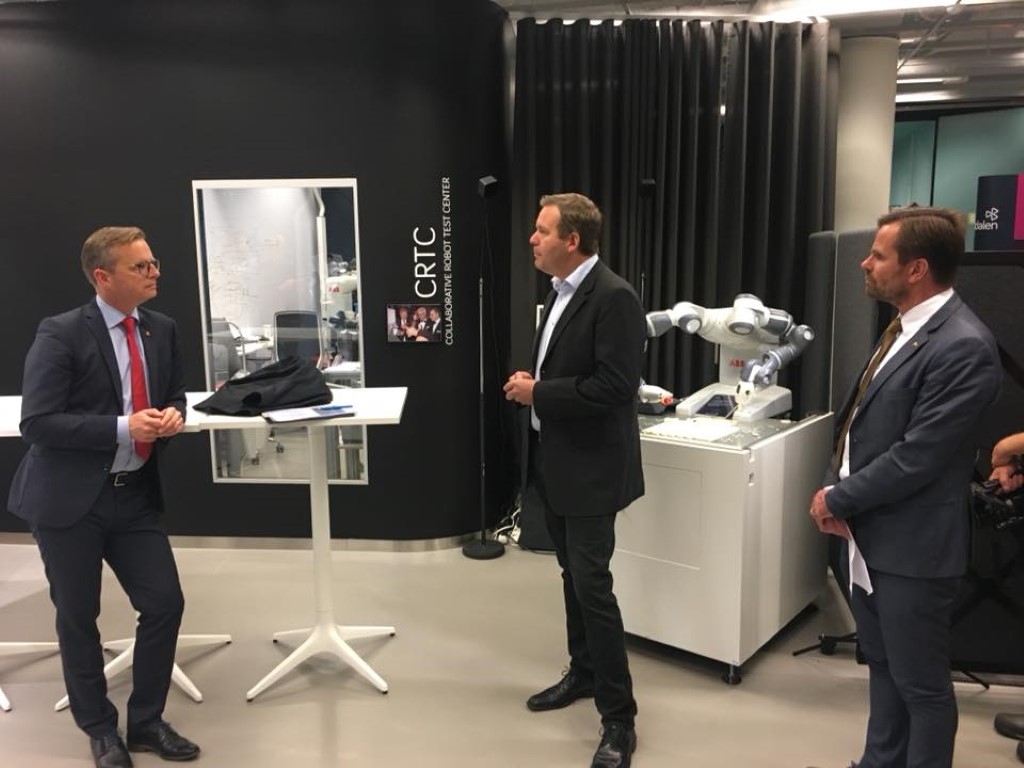 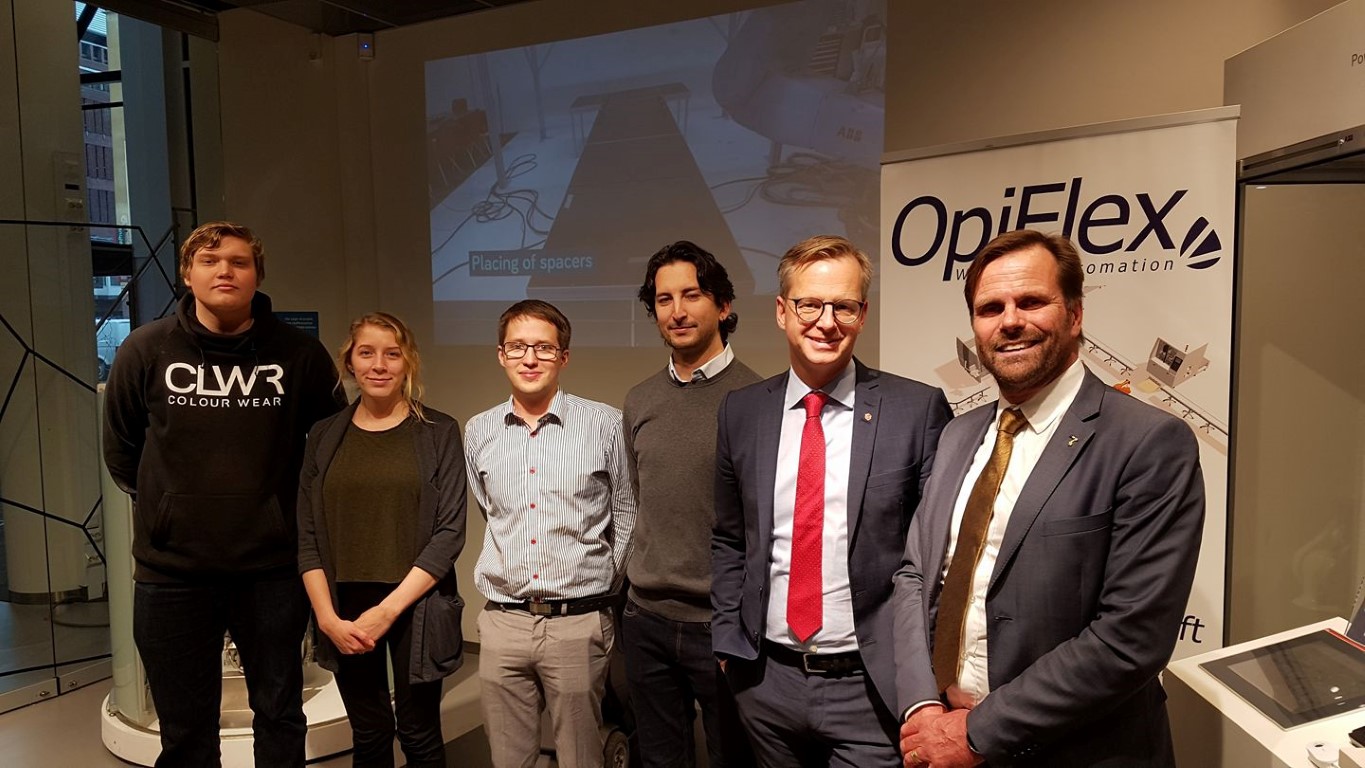 cture: Swedish Minister of Trade and Industry Mikael Damberg together with parts of OpiFlex team
Calculate how you can profit from automation